Remembrances of Excellency Past: Presenting “I, Claudius,” The Completely Outstanding 1976 BBC Television Series, Soon-To-Be-Remade By HBO

Presenting The Passions: I’m In Love With A German Film Star 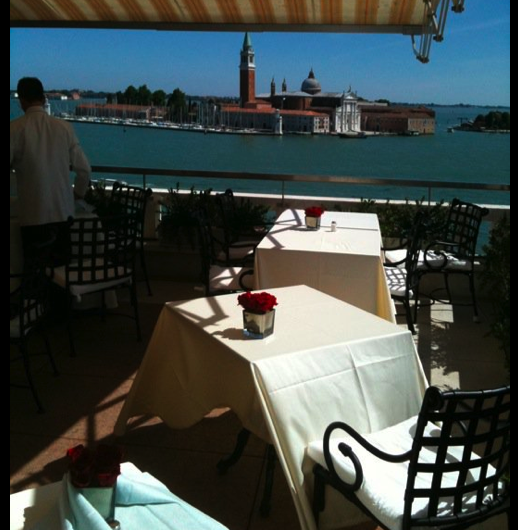 On Location: Lunch at Hotel Danieli, Venice. Image via The Excellent People.

Applauding artist Scott Campbell‘s outstandingly Excellent reaction to the installation of his recent sold out show of works cut from $100 bills at Vice Gallery in the Roma neighborhood of Mexico City. Via Adam Bryce of Slamxhype: “A few weeks ago we mentioned the upcoming solo show of Scott Campbell at Mexico’s Vice Gallery. We were pretty excited to see new works from the hugely popular artist, one of our favourites, but also one of the world’s most in demand contemporary artists. As expected with a Scott Campbell show, the works sold out opening night, but the show didn’t end there. Campbell had issues with the way the gallery executed and handled the show, and after seeing no genuine comeback from the owner, the NYC Tattoo come fine artist took his entire sold out show to the sidewalk and lit fire to it! A lesson to all gallery owners to show the upmost respect its artists! If Scott wasn’t held in high enough regard by us already, he’s just boosted his stock ten-fold.” Agreed.

Burny money (and art): Scott Campbell burns all the Excellent works from his recent sold out show at Vice gallery in Mexico. Image via Slamxhype via Purple Diary.

Nathan, at one of the outlying tables,
his legs tangled up in the disc jockeys cables,
surveyed the room as unseen as a ghost,
while he mulled over what he might say for his toast.
Though the couple had asked him for his benediction,
seemed at odds with them parking him here by the kitchen.

That he’d shown up at all was still a surprise,
and not just to him,
it was there in the eyes of the guests
who had seen a mirage and drew near,
and then covered their shock with a ‘Nathan, you’re here?’.
And then silence, they’d nothing to say beyond that.
A few of the braver souls lingered to chat.
They all knew and it wasn’t a mystery
that he and the couple had quite an odd history.
Their bonds were a tangle of friendship and sex,
Josh, his best pal once, and Patty, his ex.

For a while he couldnt go out in the city,
without being a punchline, or object of pity.
‘Poor Nathan’ had virtually become his new name,
So he showed up just to show he was game,
Though his invite was late, a forgotten addendum
For Nate there could be no more clear referendum,
That he need but endure through this evening and then
He would likely not see Josh and Patty again.

Josh’s sister was speaking, a princess in peach.
Nathan dug in his pocket to study his speech.
He’d poured over Bartlets for couplets to filch,
He stayed up till three, still came up with zilch.
Except for instructions he’d underscored twice.
Just two words in length, and those words were: be nice.

Too often, he thought, our emotions betray us,
and reason departs once we’re up on the dias.
He’d witnessed uncomfortable moments,
where others had lost their way quickly,
where sisters and brothers had gotten too prickly.
He’d heard their babbling with stories of benders,
Or lesbian dabbling, or spot-on impressions of mothers-in-law,
which true, Nathan thought, always garnered guffaws,
But the price seemed too high,
with the laughs seldom cloaking hostility, masquerading as joking.

No, he’d swallow his rage and he’d bank all his fire.
He knew that in his case, the bar was set higher.
Folks were just waiting for him to erupt,
they’d be hungry for blood even though they had supped.
They’d want tears, or some other unsightly reaction,
And Nathan would not give them that satisfaction.
Though Patty a harlot and Josh was a lout,
At least Nathan knew what he’d not talk about.
I won’t wish them divorce, that they wither and sicken,
Or tonight that they choke on their salmon or chicken.
I won’t mention that time when the cottage lost power,
In that storm on the cape and they left for an hour.
And they thought it was just the cleverest rouse,
to pretend it took that long to switch out the fuse.
Or that time Josh advised me with so much insistence,
that I should grant Patty a little more distance,
that the worst I could do was to hamper and crowd her,
that if Patty felt stifled, she’d just take a powder,
that a plant needs its space just as much as its water,
that I shouldn’t give Patty that ring that I bought her,
That in retrospect only elicits a ‘gosh,
I hardly deserved a friend like you, Josh’
No, I won’t spill the beans, or make myself foolish,
To satisfy appetites venal and ghoulish.
I will not be the blot on this hellish affair.
And with that Nathan pushed out and rose from his chair.
And just by the tapping of knife against crystal,
All eyes turned his way, like he’d fired off a pistol.

‘Hmm, Josh, well, Patricia, a few family and friends,
I’ll say a few words, if you will, before everything ends.
You’ve promised to honor, to love and obey,
We’ve quaffed our champagne and been cleansed by sorbet,
All in endorsement of your hers and hisdom,
So now let me add my two sense worth of wisdom.
I was racking my brain, sitting here at this table,
Until I remembered this suitable fable,
That gets at a truth, though it may well distort us.
So here with the Tale of the Scorpion and Tortoise.
The Scorpion was hamstrung, his tail all aquiver,
Just how would he manage to get cross the river,
‘Why, the water’s so deep’ he observed with a sigh,
Which pricked at the ears of a tortoise nearby.
‘Well, why don’t you swim?’ asked the slow-moving fellow,
‘Unless you’re afraid, I mean what are you yellow?’
‘It isn’t a matter of fear or of whim’, said the scorpion,
‘But that I don’t know how to swim’
‘Ah, I didn’t mean to be glib when I said that,
I figured you were an amphibian’
‘No offense taken’ the Scorpion replied,
‘But how bout you help me to reach the far side?
You swim like a dream, and you have what I lack,
what’s say you take me across on your back?’
‘I’m really not sure that’s the best thing to do’ said the Tortoise,
‘Now that I see that it’s you. You’ve a less than ideal reputation preceding,
there’s talk of your victims all poisoned and bleeding.
You’re the Scorpion, and how can I say this, but well,
I just don’t feel safe with you riding my shell.’
The Scorpion replied, ‘What would killing you prove?
We’d both drown, so tell me, how would it behoove me,
to basically die at my very own hand,
when all I desire is to be on dry land.’
The Tortoise considered the Scorpions defense.
When he gave it some thought it made perfect sense.
The niggling voice in his mind he ignored,
And he swam to the bank and called out, ‘Climb aboard’.
But just a few moments from when they set sail,
the Scorpion lashed out with his venomous tail.
The Tortoise too late, understood that he’d blundered,
when he felt his flesh stabbed and his carapace sundered.
As he fought for life he said, ‘Tell me why you have done this,
For now we will surely both die?’
‘I don’t know!’, cried the Scorpion,
‘You never should trust a creature like me,
because poison I must. I’d claim some remorse or at least some compunction,
But I just can’t help it, my form is my function!
You thought I’d behave like my cousin the crab,
But unlike him, it is but my nature to stab.
The Tortoise expired with one final quiver,
And then both of them sank, swallowed up by the river.

The Tortoise was wrong to ignore all his doubts,
because in the end friends, our natures will out.

Nathan paused, cleared his throat, took a sip of his drink,
He needed these extra few seconds to think.
The room had gone frosty, the tension was growing,
Folks wondered precisely where Nathan was going.
The prospects of skirting fiasco seemed dim,
But what he said next surprised even him.

‘Soooo, what can we learn from their watery ends?
Is there some lesson on how to be friends?
I think what it means is that central to living a life that is good, is a life that’s forgiving.
We’re creatures of contact. Regardless of whether we kiss or we wound,
Still we must come together.
Though it may spell destruction, we still ask for more,
Since it beats staying dry, but So Lonely on shore.
So, we make ourselves open,
while knowing full well its essentially saying,
‘Please, come pierce my shell’

Silence doesn’t paint the depth of quiet in that room.
There was no clinking stemwear toasting to the bride and groom.
You could have heard a pedal as it landed on the floor.
And in that stillness Nathan turned, and walked right out the door. 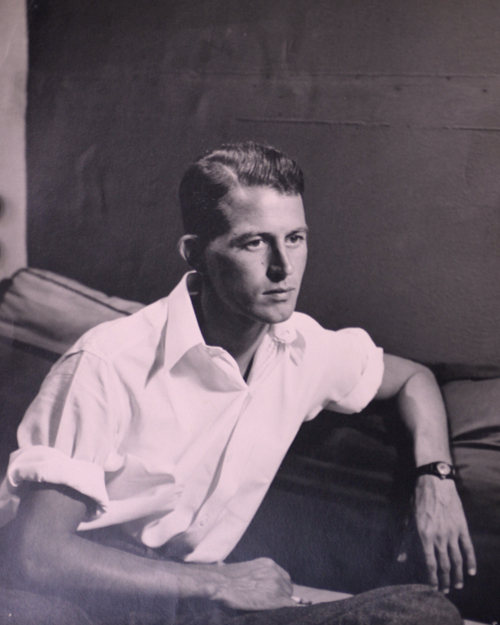 Presenting, just in time for global Fashion Weeks, the official trailer for Picture Me: A Model’s Diary, the candid backstage documentary directed by Ole Schell, who, according to press reports, “followed model Sara Ziff for several years documenting her rise from a fresh face to one that adorns billboards and magazines around the world. In the process, Ole and Sara go behind the scenes and chronicle the glitzy world of high fashion modeling, from photo shoots with celebrated photographers to runway shows in New York, Milan, and Paris. This intimate account features in-depth interviews with noted photographers and designers, but also relies on footage shot by the models themselves, giving voice to those who are often seen, but rarely heard.” With glamorous appearances by Gilles Bensimon, Karl Lagerfeld, Nicole Miller and many Outstandingly Excellent and quite fashionable others.

Cinematic Excellence: Jacqueline Susann’s Once Is Not Enough (1975)